The Office was originally a successful TV series in the UK. It became a huge hit once again when it was remade in the United States. If you’re looking for trivia for The Office series, you’re in the right place. We’ve assembled a ton of facts and information about The Office so you can play your own version of The Office Trivia game anytime! 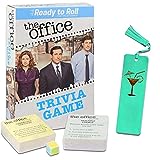 Mose was in 13 episodes of The Office between 2006 and 2013. The Office character Mose first appeared in the season 3 episode called Initiation, which was the 5th episode of that season.

Trivia for The Office Halloween Episodes